Warning: Creating default object from empty value in /homepages/20/d408740925/htdocs/blog/wp-content/plugins/redux-framework/ReduxCore/inc/class.redux_filesystem.php on line 28
 Micro Holiday in Barcelona - Nikki McWilliams 
Warning: "continue" targeting switch is equivalent to "break". Did you mean to use "continue 2"? in /homepages/20/d408740925/htdocs/blog/wp-content/plugins/jetpack/_inc/lib/class.media-summary.php on line 77

Having just (almost) caught up with my work, I thought it’d be nice to share a little bit about my “micro” holiday in Barcelona last week. I’m calling it a “micro” holiday, as it was probably shorter than a standard “mini break” – with only one full day in the city.

We arrived in Barcelona at about 7pm, met my folks at the bus station and went to their lovely apartment for a shower before dinner. 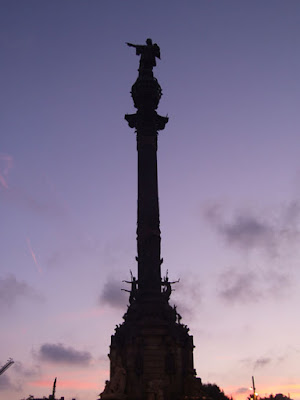 Just across from the port is a monument: it’s a column with Christopher Columbus atop. It looked nice at sunset.

With so much to see in the streets of La Rambla we didn’t get any food until late, saw some amazing street performers including a really amazing Geiger style alien and ate cinnamon ice-cream. Yum!

So Tuesday was our full day. We decided to get an open-top bus to absorb as much sunshine and sights as we could in one day. On the way we stopped to feed the fish at the harbour. 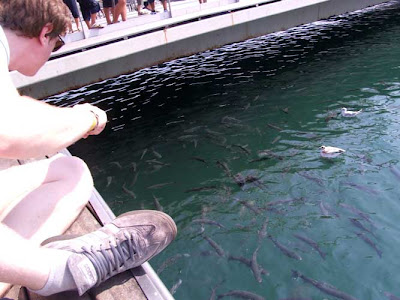 Our first stop was La Sagrada Familia, which was truly breathtaking. We didn’t go inside as we spent so long outside looking at all of the detail. Lizards, doves, snails, angels- all in stone and mosaic. Beautiful! 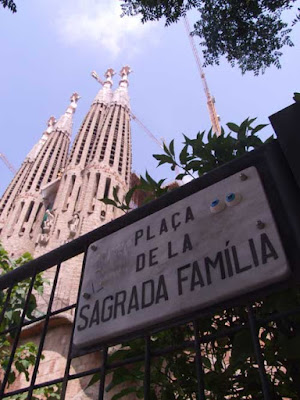 After grabbing some lunch, Gaudi’s Parc Guell was next on the agenda. I could have easily spent a whole day there, with a picnic and some coloured pencils, the architecture and view of the city was amazing. 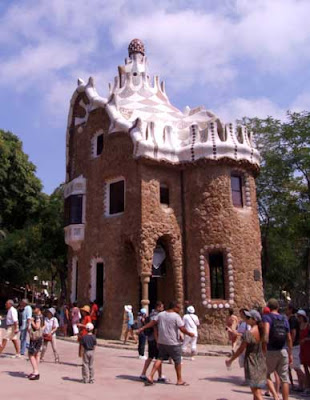 We bussed it back down to the city and saw La Pedrera & Casa Batllo before jumping off at Barceloneta Beach. It had been an absolutely boiling day so we literally ran into the sea to cool down. It was lovely.
After drying off I picked up a badge by AndaPanda, who had a little stall on the beachfront. She makes lovely badges by hand, with very cute Japanese fabrics. As you’d imagine, I couldn’t resist! 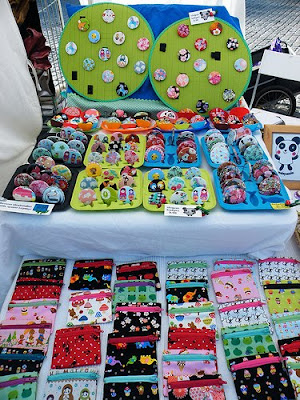 We went back to the apartment and got ready for dinner and decided to go to a restaurant that we’d seen to be queued out the door, by about 15metres. We decided to brave the wait at Les Quinze Nits assuming that such an enormous queue must mean good things. After 45 mins outside, we were seated and eating what must have been the tastiest and most reasonably priced food in Barcelona. I had a delicious chorizo entre, lovely spicey meatloaf with mustard sauce and potato puree, salad with goats cheese and honey dressing, a whole jug of sangria and a totally chocolately chocolate brownie with stracciatella icecream for pudding. Four of us ate like that, for $20 each. I’d reccomend this place to everybody!
But you’ve heard of “power naps” and how refreshing and invigorating a 20 minute snooze can be in the middle of the day. Well, with that in mind, this was definately a “power holiday” as after 24hours in another country, it felt like Scotland had never existed.

Danni and I have been working really hard to get our new idea ready for sale at Big Top Jamboree. Welcome- the Tights For Sore Eyes mini-zine! These little beauties are full of our sketches, ideas, pictures of our tights being made, and lovely fashion photos of our work decorating some legs! Each book is hand cut and stitched together….