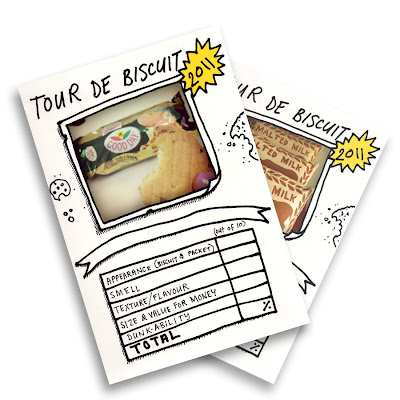 Ok, so I may not be going to France, but I thought Tour De Biscuit was a pretty catchy name for my upcoming project.

Back in 2007 (During my days as a Kid’s club rep overseas- I bet that’s something you didn’t know about me!) I was lucky enough to share an apartment in the Algarve with another lovely Kid’s rep who was just as crazy about tea and biscuis as I am.
Every week we would sample a different biscuit and score it on a chart in our kitchen: 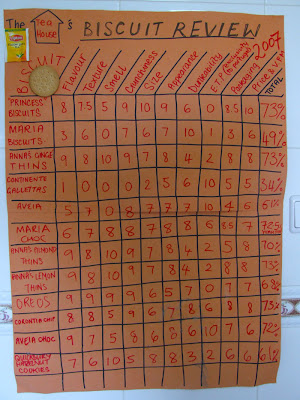 The top scoring biscuit, “Princess Biscuits” (with 73%) is a biscuit that you can actually get here in the UK, for about 80p from Lidl. They’re basically two rich tea biscuits with chocolate (flavour!) cream in between, and come to think of it now, I don’t know how they got such a high score. But we were addicted to them!

So, in the spirit of what was a really fun project, I’ve decided to do the same during my trip to Cyprus. I’ll be scoring each biscuit I try on:

If you want to join in, you can download your own Biscuit Score Sheet to print out, and fill in with a doodle of the biscuit in question and the all-important scores. I’ll be uploading all of my biscuit analysis along when I get back, but in the mean time, you can post your completed Biscuit Score Sheets in the new Tour De Biscuit flickr group. Happy Dunking/Drawing/Scoring!

Here’s a tea-inspired tune by the The Kinks to get you inspired!

At the end of week I was invited to Pinterest‘s London HQ to help them celebrate their UK office’s 2nd Birthday.  The party was Fiesta themed- so I whipped up a fun DIY activity for party goers to dabble with while they sipped margaritas  and munched nachos: Bold, embellished cactus cosies! The rooftop of Pinterest’s East London offices were decked our…