Warning: "continue" targeting switch is equivalent to "break". Did you mean to use "continue 2"? in /homepages/20/d408740925/htdocs/blog/wp-content/plugins/jetpack/_inc/lib/class.media-summary.php on line 87
 Foodie Fun in Bologna - Blue Skies & Gelato - Nikki McWilliams 
Warning: count(): Parameter must be an array or an object that implements Countable in /homepages/20/d408740925/htdocs/blog/wp-includes/post-template.php on line 284 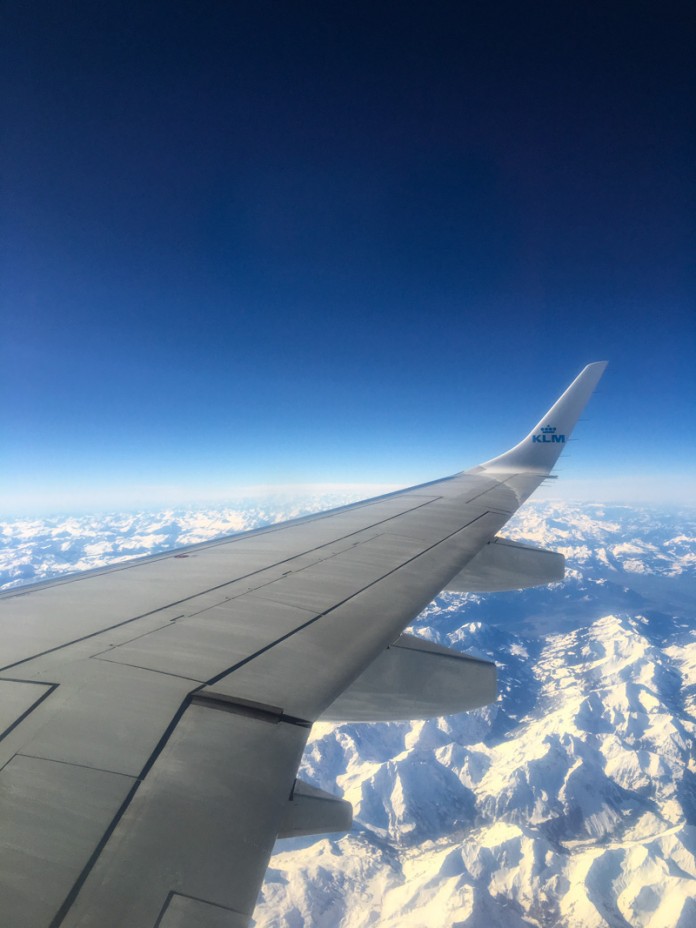 Flying over the Alps towards Bologna, Italy

After visiting Italy for the first time last Autumn, I knew that I had to return. When the Hotel Touring, a small family run hotel in Bologna asked Kat Molesworth (of Blogtacular fame) and I if we would like to visit them in Italy’s foodie capital- I didn’t think twice!

Flights from London to Bologna are quite frequent and fairly inexpensive if you catch them in advance- however for me- travelling from Scotland was a little more complicated. My flight went via Amsterdam’s massive Schipol Airport- which was an attraction in itself. I flew with KLM and my total journey time was just under 4 hours from Glasgow.

Hotel Touring arranged transfers for Kat and I who were arriving separately. I’m usually one for trying to figure out local transport when I travel- but having a driver wait for you on arrival was such a treat. I was out of the airport and zipped through Bologna to the hotel in a flash!

Bologna’s blue skies were a welcome change to the somewhat relentless stretch of sideways wind and rain we’re experiencing in Scotland at the mo- and while February’s weather wasn’t super toasty- it was clear, crisp and bright. Perfect for taking in the view from Touring’s rooftop terrace: 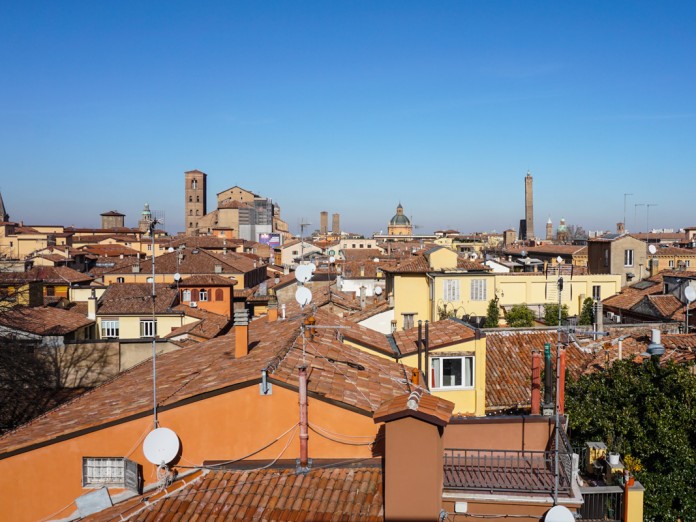 Our room was everything that you could want from a place to stay on a city break- I always count a comfortable bed and a good shower to be markers of a good home-from-home- and the Hotel Touring did not disappoint. We noticed straight away- that although we were very close to the centre of the city, our room was lovely and peaceful. 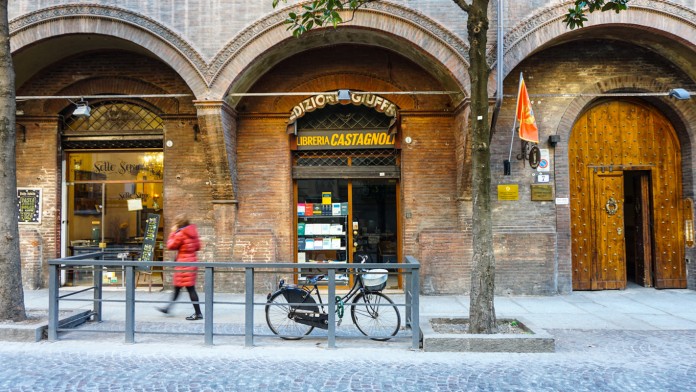 We picked up a map from reception (always handy alongside trust Google maps!) and left the hotel to explore. Did I mention that the Hotel Touring is just off Via Garibaldi? This city was made for me! 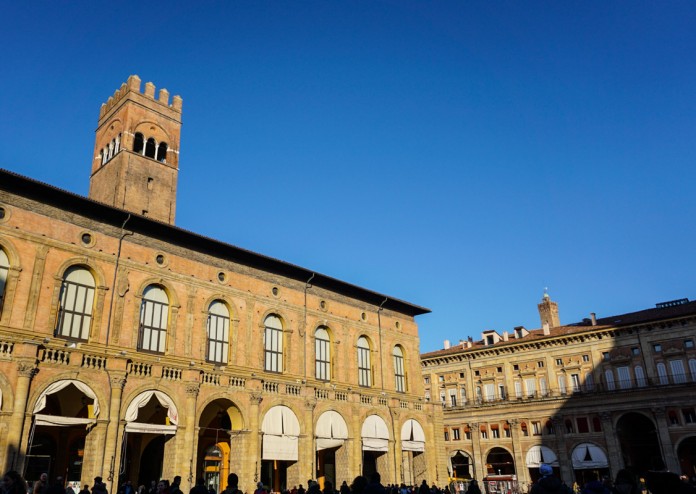 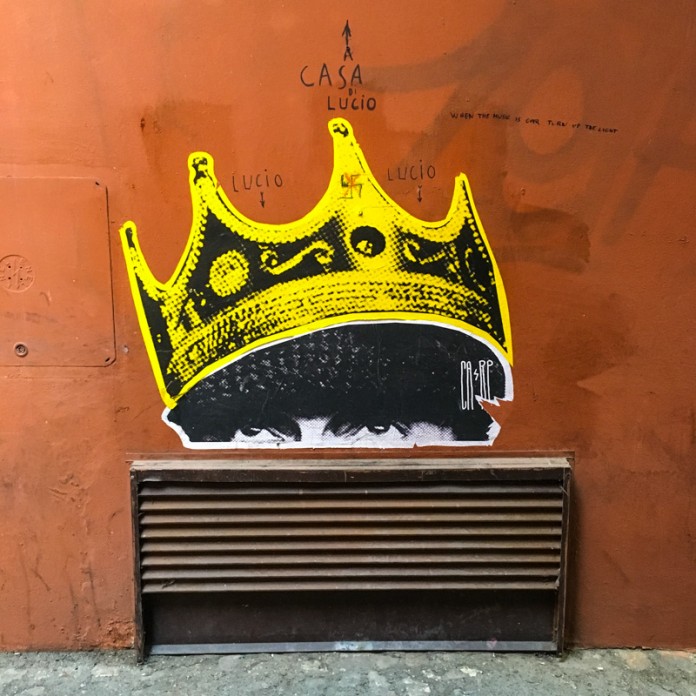 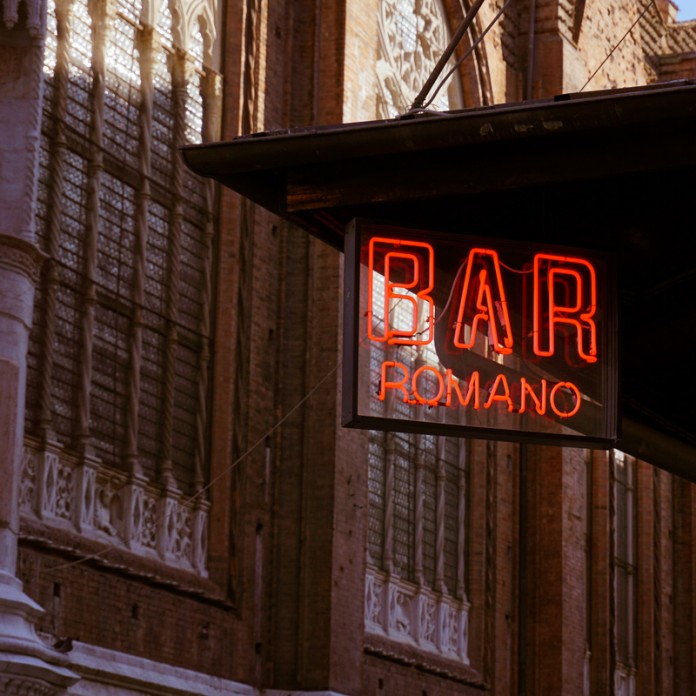 Bold shutters in every colour & style 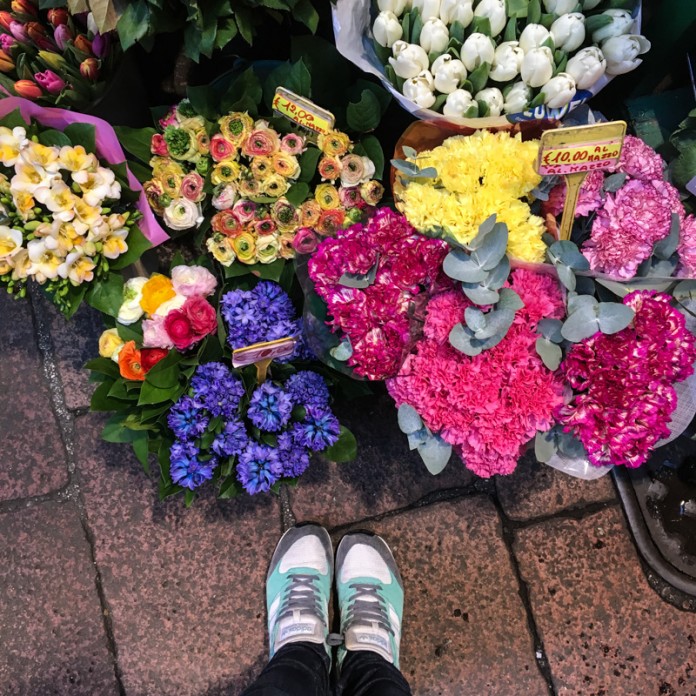 Bright Blooms at the Flower Market in Bologna

We made a bee line for Piazza Maggiore, Bologna’s main square. It was lined on almost every side with the city’s characteristic porticoes (there are just under 40km of these!) each of which had their own unique style. I loved the custard yellow tones on this one: 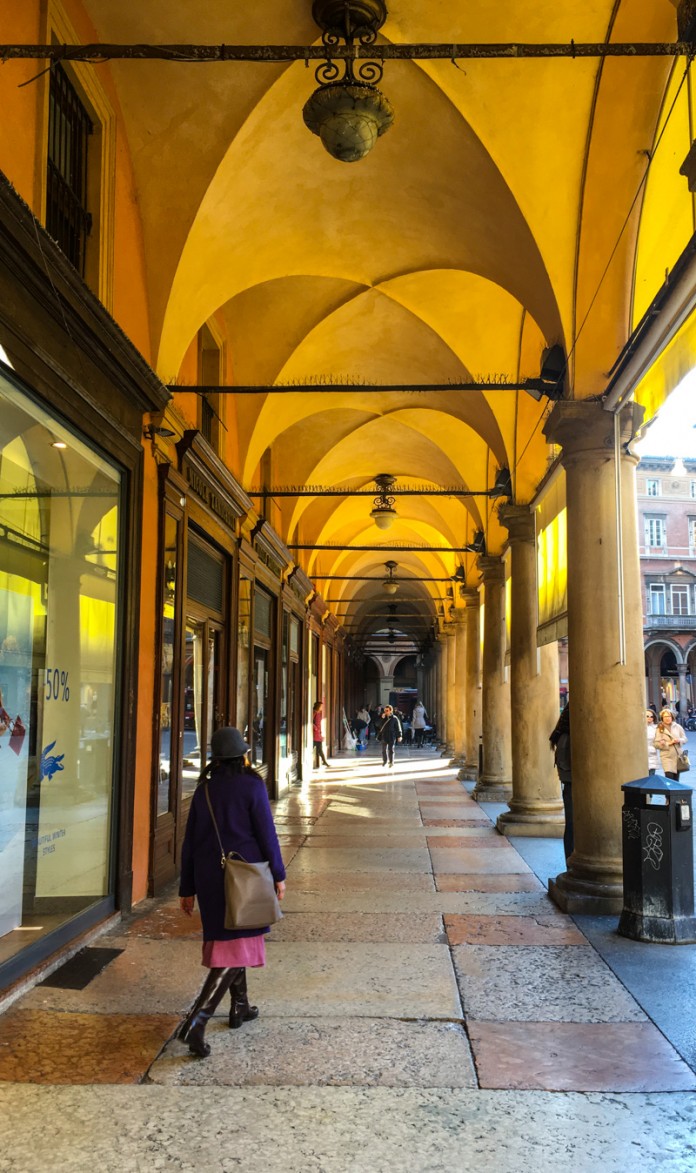 We did a spot of people watching and street photography in the square as the light faded. That evening, we had a table booked for supper at Osteria de’Poeti – an atmospheric restaurant & wine bar in the historic center of Bologna. We walked from the Hotel Touring in around 10 minutes- just enough time to build our appetites in the chilly evening air! 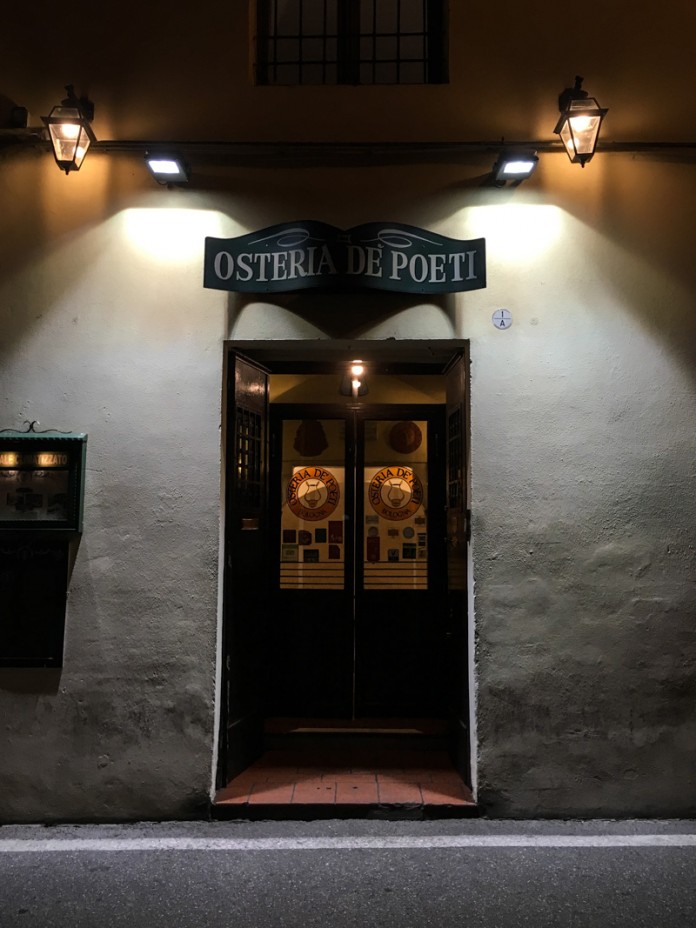 Everything we saw being served at the restaurant looked wonderful (I can still smell the rosemary from a huge roast that was presented to a party dining near to us- I should have really asked for a slice!) but the food that we chose was excellent.

Between us, we ate Mortadella mousse (Mortadella is the local speciality sausage) and bruschetta along with artichoke & parma ham to start; then Kat chose porcini mushroom tagliatelle while I sampled their giant handmade ricotta & parmesan ravioli. Bellissima! Poeti’s wine selection was incredible- and our lovely waitress recommended some Sangiovese which was the perfect accompaniment. 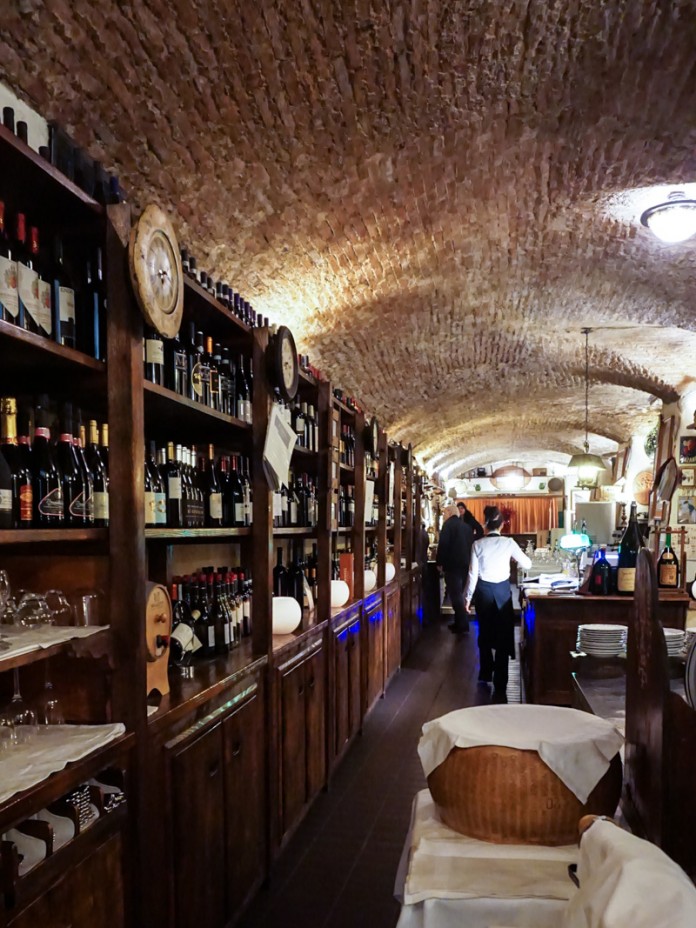 They had a whole host of traditional and delicious desserts to choose from- but we decided to save ourselves for another Italian delicacy: GELATO!

We affectionately named our exploration of the local ice-creams #gelatobender and set about making our way around Bologna’s top Gelaterias. Our first stop was Cremaria Funivia– which was conveniently minutes from the the restaurant (and not far from the hotel either) where we both tried their speciality Biscotto ice-cream sandwiches. Ice-cream sandwiches aren’t so much a “thing” in the UK- but will always remind me of sunny summer holidays visiting our grandparents in Cyprus; so stumbling across these little delights was a total treat!

One thing about that I truly LOVED about this place was that the staff encouraged you to try lots of different flavours before choosing. We took full advantage!

My sandwich contained Funivia’s “Alice” special blend gelato- which was mixed with mascarpone and chocolate, before being dipped in rich dark chocolate and a tonne of pistachios: 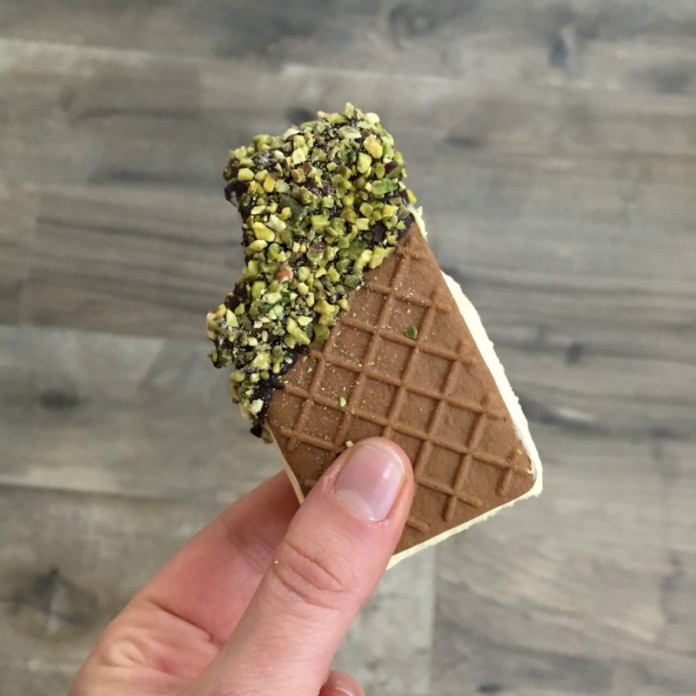 By 11.30pm we were back at the hotel, full of the best pasta & gelato we’d ever eaten and excited for our adventures the next day. We were going to Pasta School!

I’ll post part 2 of our trip soon. In the mean time, you can catch up with the rest of our trip photographs via the #NKinBologna tag on Instagram. 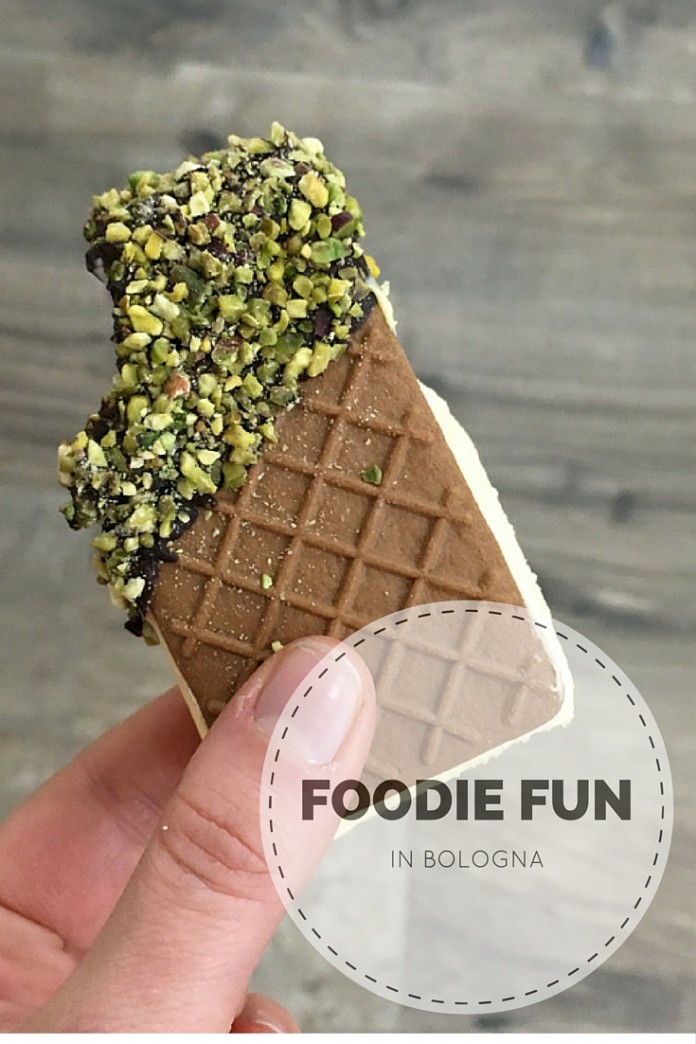 Here’s some wee cakes inspired by Reeses Peices…the icing is chocolate and peanut buttery! I’m going to start recording my cake-making again. I’ll add a gallery of my previous cakey art…hopefully to inspire me with the upcoming cake-expo at DOJ.