Warning: "continue" targeting switch is equivalent to "break". Did you mean to use "continue 2"? in /homepages/20/d408740925/htdocs/blog/wp-content/plugins/jetpack/_inc/lib/class.media-summary.php on line 87
 Foodie Fun in Bologna - Pasta School! - Nikki McWilliams 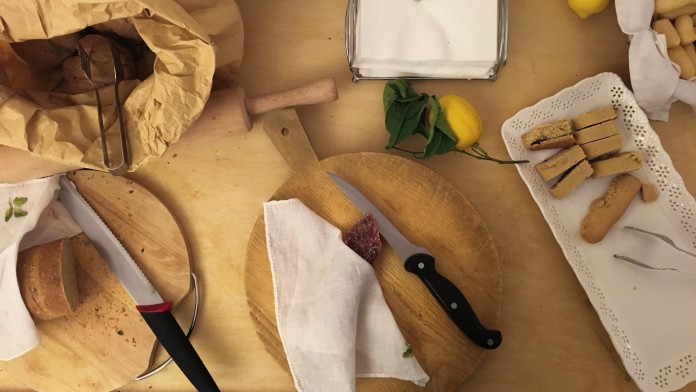 We had an early start for our second day of fun in Bologna. Opening the shutters to let in the cool morning air, we got dressed for the slightly cooler (weather-wise) day ahead and left our room to grab some breakfast.

The morning spread at Hotel Touring was just what I needed to set me up for the day: eggs, salami, fresh bread & lots of fresh coffee (this was particularly delicious)

Running a little late, (breakfast was worth it!) we grabbed a taxi to take us across the city to our morning session with CIBO. 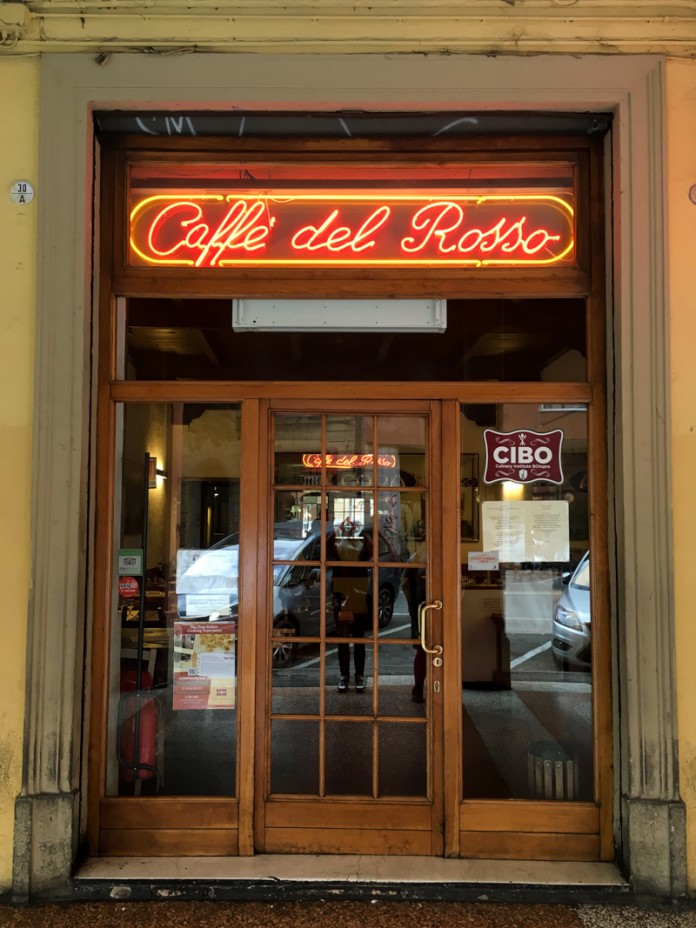 In our class- we were to learn how to make stuffed pasta- including fancy little tortellino & ravioli. I’d only made pasta for the first time a few weeks previous (I wanted to get a practise run in before being let loose in an Italian kitchen!) but I was excited to find that the class was more focussed on constructing the pasta parcels & creating the delicious fillings than on dough-making.

I love making things with my hands (especially when they’re edible things) so I was excited to be able to learn some new techniques. Mr Biscuit and I often work late which means that a quick evening meal is often on the cards for us. When we can, there’s nothing we love more than setting aside some uninterrupted kitchen time to spend trying out new recipes with a wee glass of wine. 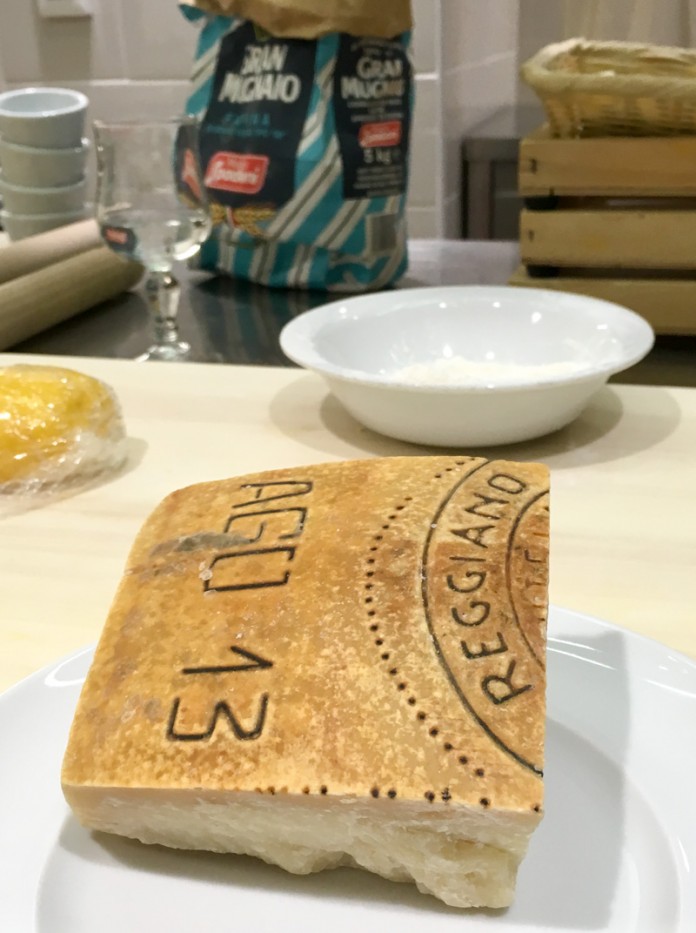 My travel buddy Kat made a lovely film documenting the Tortellino making process, which you can find along with the recipe to make some tortellino of your own over on her blog.

As I’m sure you can imagine, making pasta is hungry work, so when our finished tortellino, ravioli & tagliatelle were whisked off to the kitchen to be cooked, we were nothing short of delighted! 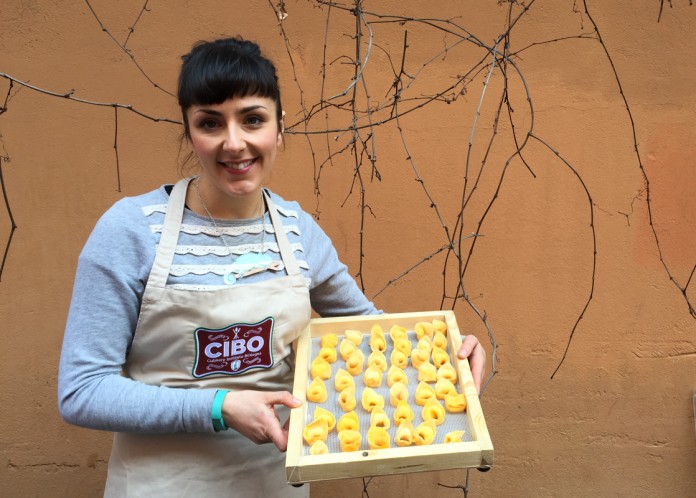 We left CIBO full of pasta, new skills and a hunger for more Italian culture. Bologna is an amazing city to explore on foot, and we spent our afternoon meandering through terracotta toned side streets, on a mission for some local delicacies to take home with us. 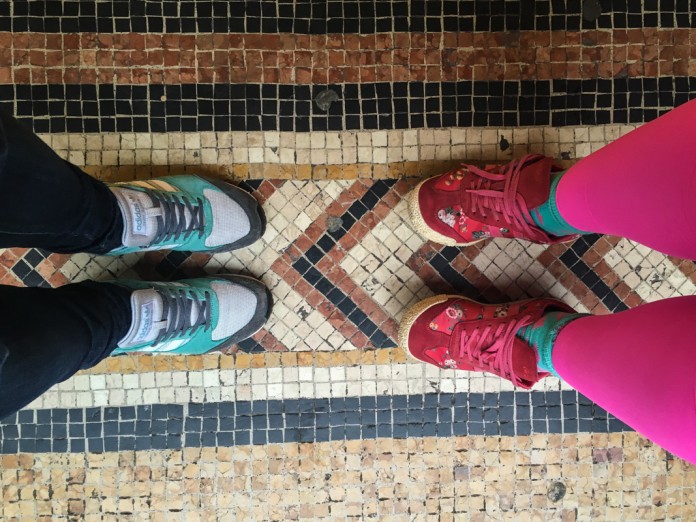 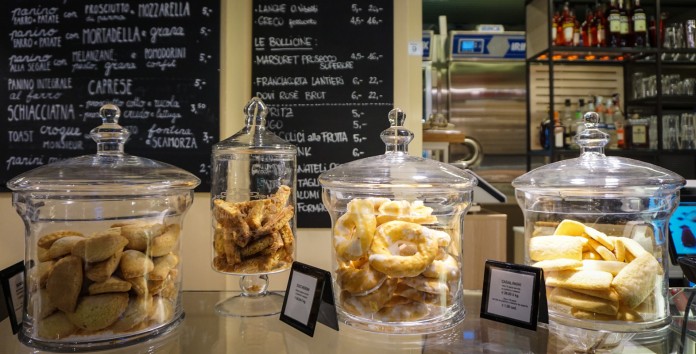 Lovely Manuela at Hotel Touring recommended a market which was off the main tourist trail (Just off of Via Ugo Bassi) and it was here that I picked up a big heavy wedge of 36month old Parmesan & some similarly ancient balsamic vinegar, made nearby in Modena. We also spotted these incredible pink lettuces- which Manuela later told us were a speciality of the north of Italy. I’d definitely eat more salad if it came in this shade of pink! 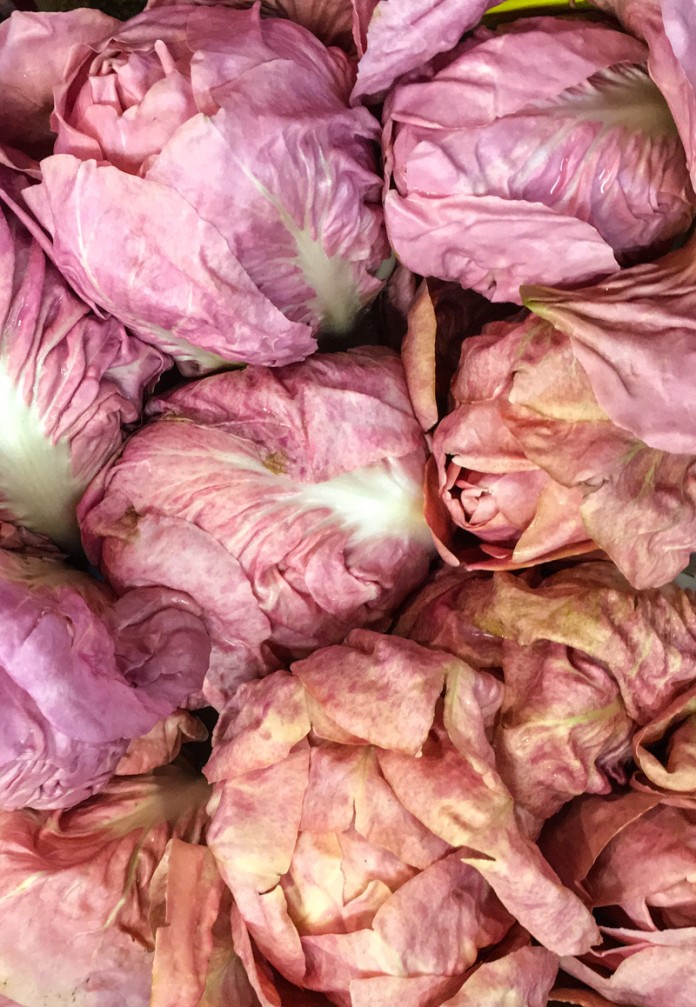 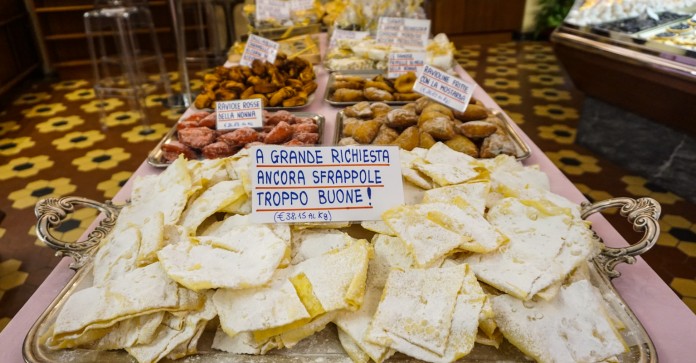 Paolo Atti & Figli: The only place to go for your bounty of suitcase pasta!

Amazingly, green grocers and fresh fruit & veg markets are few and far between where we live in central Scotland. Supermarkets just aren’t the same, so I particularly enjoyed wandering through Bologna’s street markets- the colours and choice were simply beautiful. If only we had this kind of selection at home! 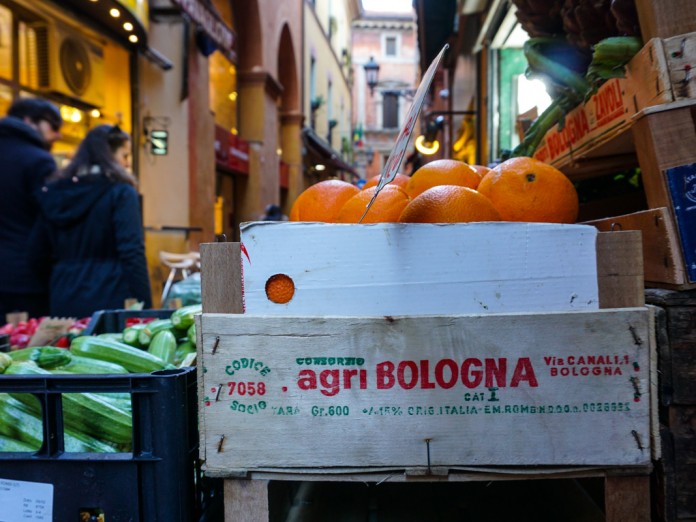 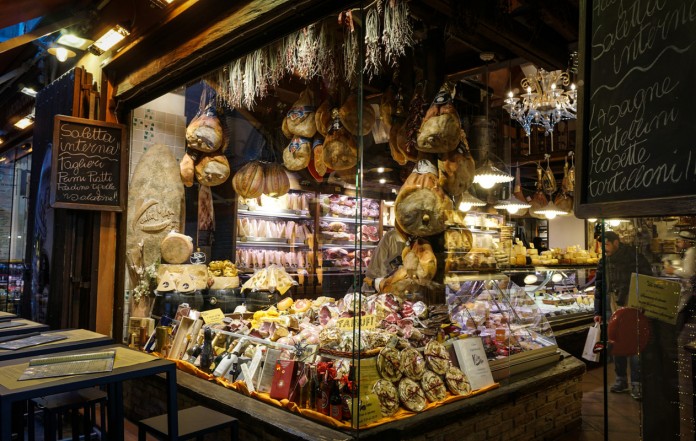 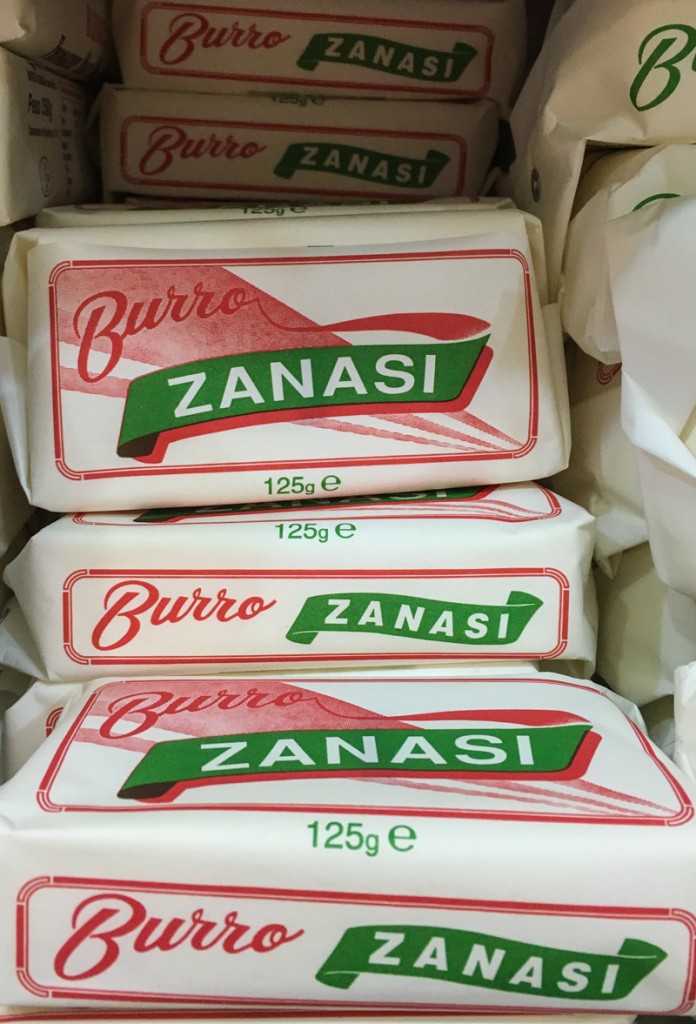 We also added a few stops to our #gelatobender- which was in my opinion the perfect way to round off our trip. This mini cone was filled with Pistachio gelato. My favourite! 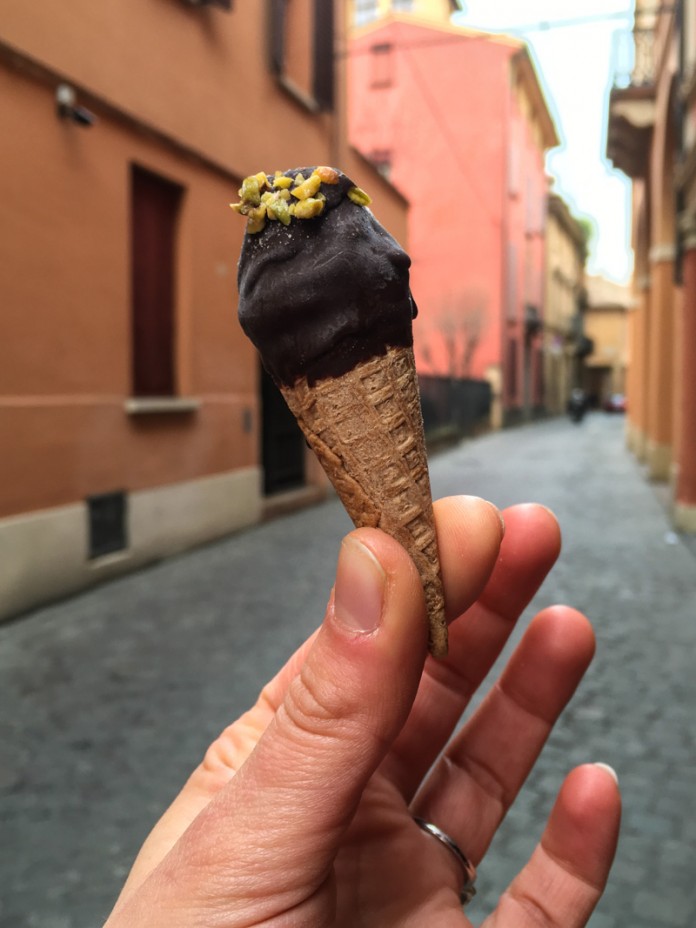 The absolute winner for me on the #GelatoBender front though, was Cremaria Funivia. We ended up here twice in the space of around 24 hours- which says a lot. The cone below looks small- but it was packed with three different flavours of the creamist gelato that I have ever tasted.  This little beaut had a scoop of Contessa (Amaretti biscuit & Caramel); Ciocolatto Fondente (Chocolate with wee pieces of chocolate cake!) & another which I can’t recall the name of (blame the gelato haze) but which was packed with dark chocolate and chopped cherries. SO GOOD! 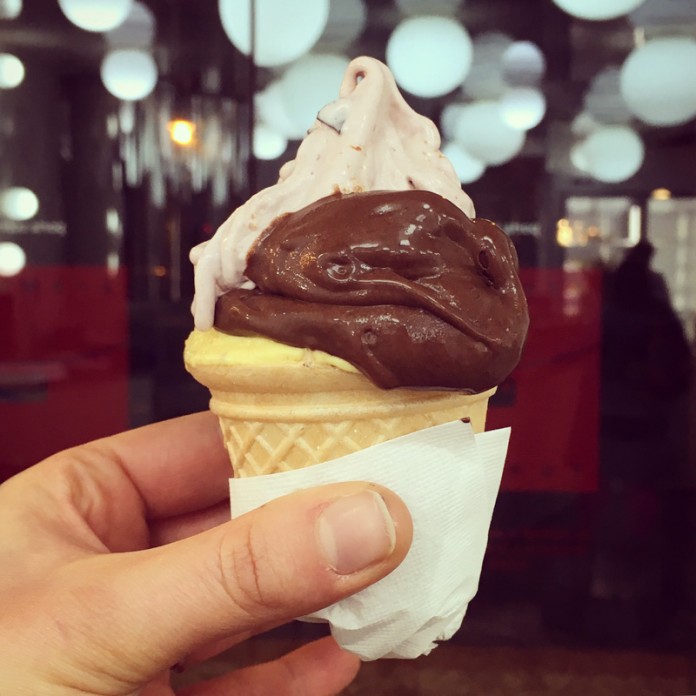 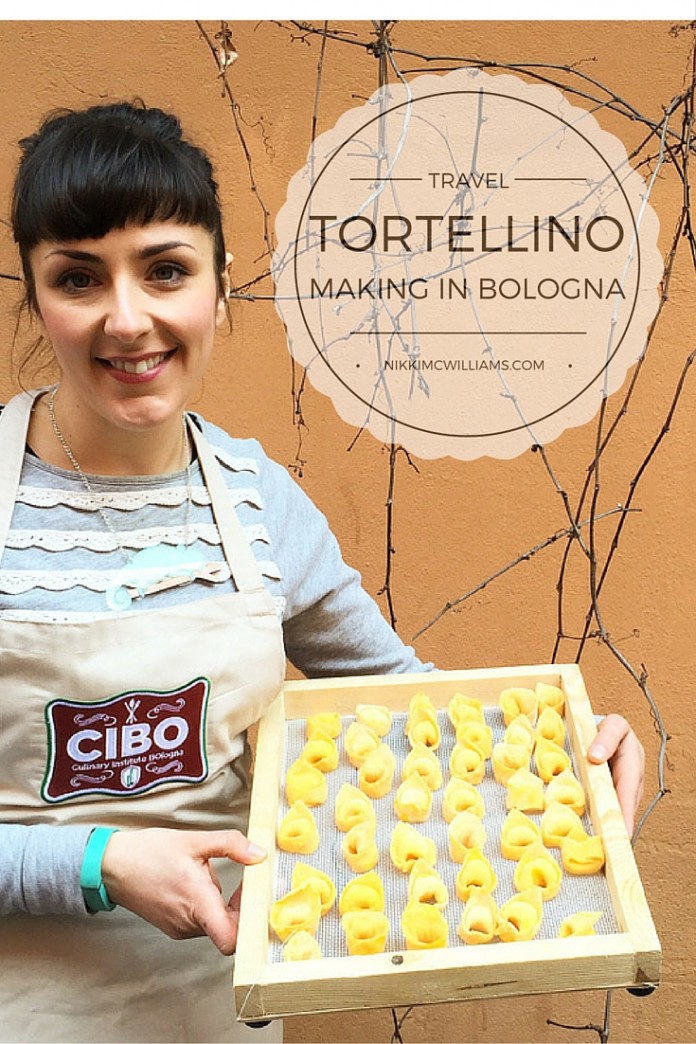 This week I worked on a collaborative Zine with Lauren Gentry called “Choccy Biccy”. The Zine has been sent to Glasgow’s Montgomerys Cafe for Now Now Projects’ Zine Showcase, which opens this Sunday, 14th of March, and runs until the 4th of April. So if you’re down Glasgow-way and you fancy nabbing yourself one of the 40 Free Zines we’ve…